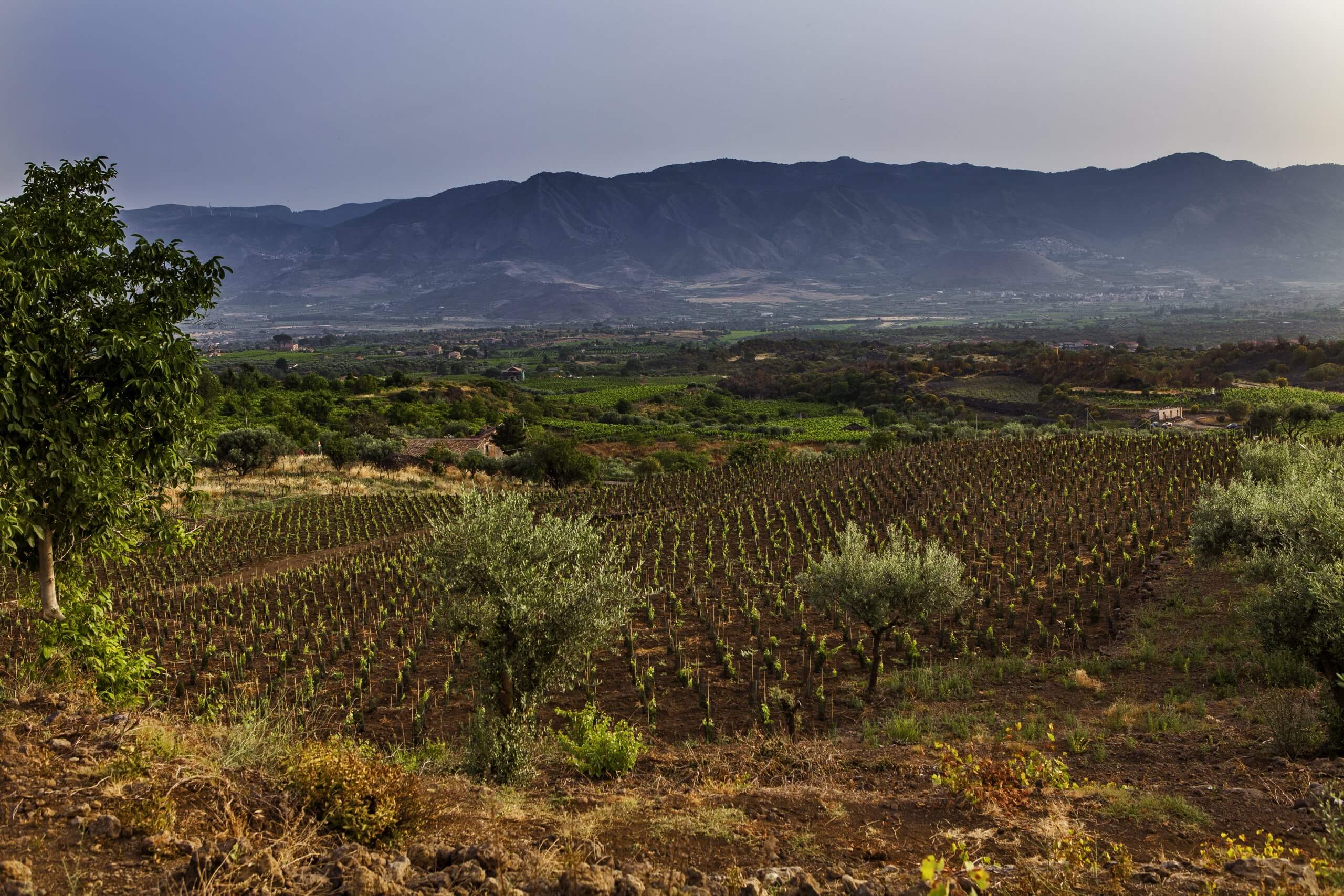 Cusumano’s logo is a lion’s face in the sun. The lion symbolizes courage, the sun the warmth of Sicily. 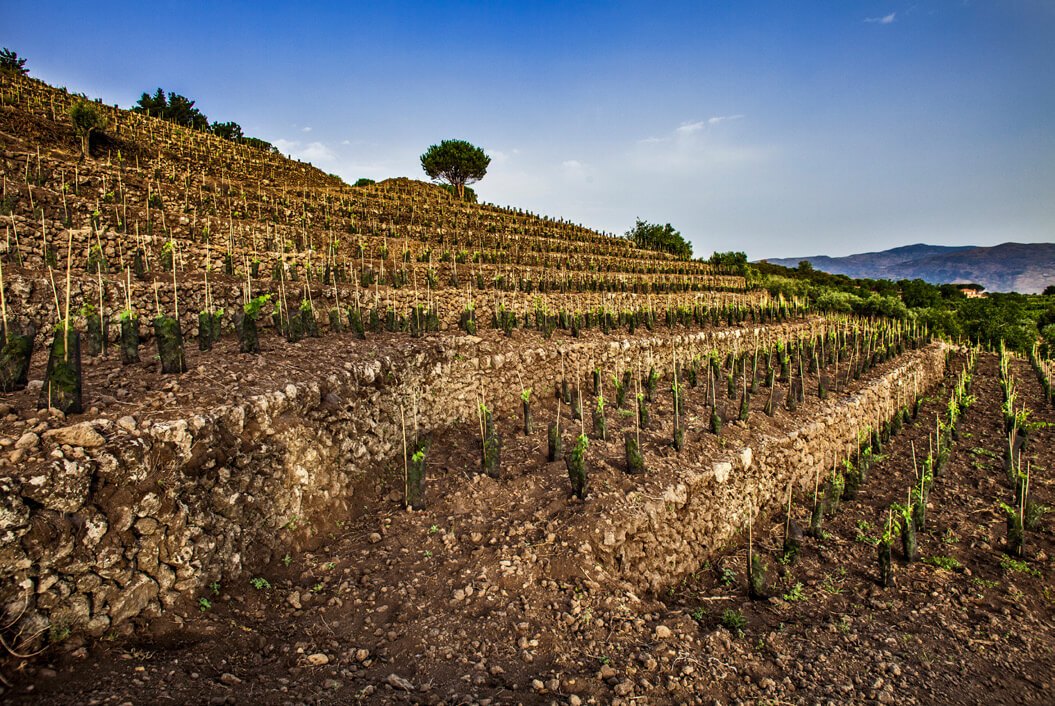 The picturesque, terraced Guardiola vineyard lies on the northern slopes of Mount Etna. Planted with Nerello Mascalese, the grapes are expected to deliver one the best red wines from this unique region. The initiator was Cusumano, a winery that has demonstrated for more than 20 years now what can be achieved in Sicily with positive energy and visionary dynamism.

“We had the rare opportunity to buy fifteen hectares of vineyard on Mount Etna, including seven in fabulous Guardiola site”, explains Diego Cusumano, who manages the winery with his brother, Alberto. “Our soils here are unique, in fact ideal for our project, namely that each wine should truly reflect its origin.”

It was only some twenty years ago that the wines of Etna began taking large steps towards higher quality. Today they are developing ever faster as a younger generation of ambitious farmers is finally understanding how to tease the best out of this soil’s unique potential. To that end they have revitalized old vineyards, planted new ones and introduced modern systems of agricultural management.

Many winemakers from this ancient volcano have also started to adopt the ideals of Burgundy and thus vinify their best vineyards separately, with the white Carricante and the red Nerello Mascalese taking on the roles of Chardonnay and Pinot Noir. In particular, the Guardiola site has proven why Diego and Alberto Cusumano are convinced that this concept paves the way for an even better future.

The Grand Cru Guardiola site is situated on the northeastern slope of Mount Etna near the village of Randazzo. Here the autochthonous variety Nerello Mascalese is pruned using the traditional Alberello method. Nonetheless this impressive vineyard is as much a cultural heritage as an agricultural project as such a steep, terraced site can only be cultivated manually and harvested by hand, adding costs of more or less €1,30 per kilogram of grapes!

Guardiola is part of Cusumano’s larger Etna project aptly named Alta Mora. Alta, of course, means high and refers to the altitude, with some vineyards rising to more than 1,000 metres above sea level. Mora, meaning dark or black, describes the colour of the soil, which consists of lava, pumice and basalt. It also contains minerals like iron, copper and magnesium that add nuance to the flavour of the wines. 2013 was the first vintage at Guardiola.

Two other labels also belong to the Alta Mora project, the Etna Bianco and the Etna Rosso respectively made of Carricante and Nerello Mascalese. Here the name Cusumano recedes into the background, emphasizing both the Etna project, Alta Mora, and the Burgundian ideal.

Cusumano’s historical winery is located in Partinico, a small town about thirty kilometres west of Palermo. In 2001, Alberto and Diego took over the property from their father, Francesco. Today, the pair own five hundred hectares dispersed across the entire island. Contrary to what most other Sicilian wineries would do, Cusumano has chosen to use only grapes from their own vineyards for each of their wines. These include not only autochthonous varieties like Nero d’Avola, Nerello Mascalese, Carricante, Insolia, Grillo or Catarratto Lucido, but also international ones like Syrah, Merlot or Chardonnay.

Today, Cusumano is without any doubt one of the flagships of Sicily, an island where less than a quarter of the total production might be considered “quality wines”. Much as the labels are well designed in a modern fashion, many of the bottles have glass closures. And the wines themselves? Each emphasizes its origin in an elegant, modern and yet authentic way, without being trendy. The idea is to remain both refreshingly pleasing and at the same time affordable!

Although in high demand in Sicily itself, which accounts for more sales than the rest of Italy combined, over half of their production is now exported to some 75 countries around the world. 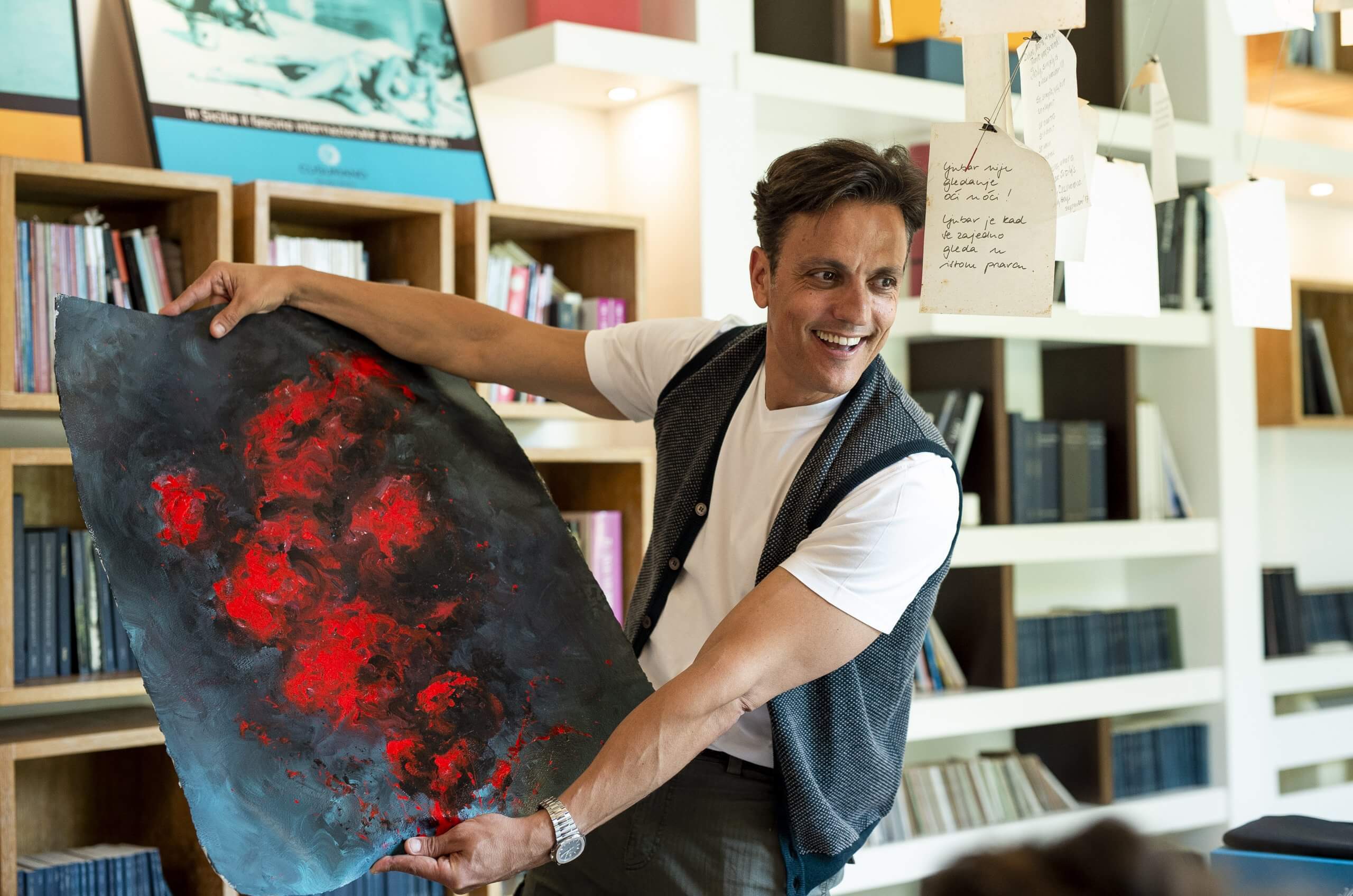 Dynamic, charismatic and sportive, Diego Cusumano doesn’t simply enter a room, he captures it with a temperament like a volcano, seething with ideas. Interviewing him is thus no easy undertaking. That said, Diego sees himself as a global ambassador for Sicily, in particular for terroir wines that reflect the taste of their soils.

This estate is located about 40 kilometres south of Palermo on 190 hectares vineyard that are planted primarily with white varieties like Insolia and Chardonnay for both the monovarietal classics and also the wines from individual sites such as Chardonnay “Jalé”, the Insolia “Cubìa” and Angimbé, a blend of the two grapes. A bit of Pinot Nero is also found on the cooler northern slope. All of the vineyards are situated some 650 to 800 metres above sea level and enjoy a relative cool microclimate with large diurnal temperature swings. In winter it even snows! It thus follows that the whites are elegant, the reds fine.

On the sun drenched hills between Palermo and Trapani in the western part of Sicily red varieties such as Nero d’Avola, Merlot, Cabernet Sauvignon and Syrah predominate. Balanced, complex and elegantly fruity, they are used principally for Noà and Benuara. The former was, by the way, the first Italian wine rated with ‚tre bicchieri’ by Gambero Rosso, so their highest accolade, in its very first vintage.

Not far from Presti e Pegni, on Monte Pietroso’s cool northern slopes, Cusumano farms Grillo, an autochthonous white variety. Instead of using it for Marsala as many traditionally would have done, they produce a crisp, clean, refreshing white called Shamaris, which reflects the aroma of the soil, rich in minerals. 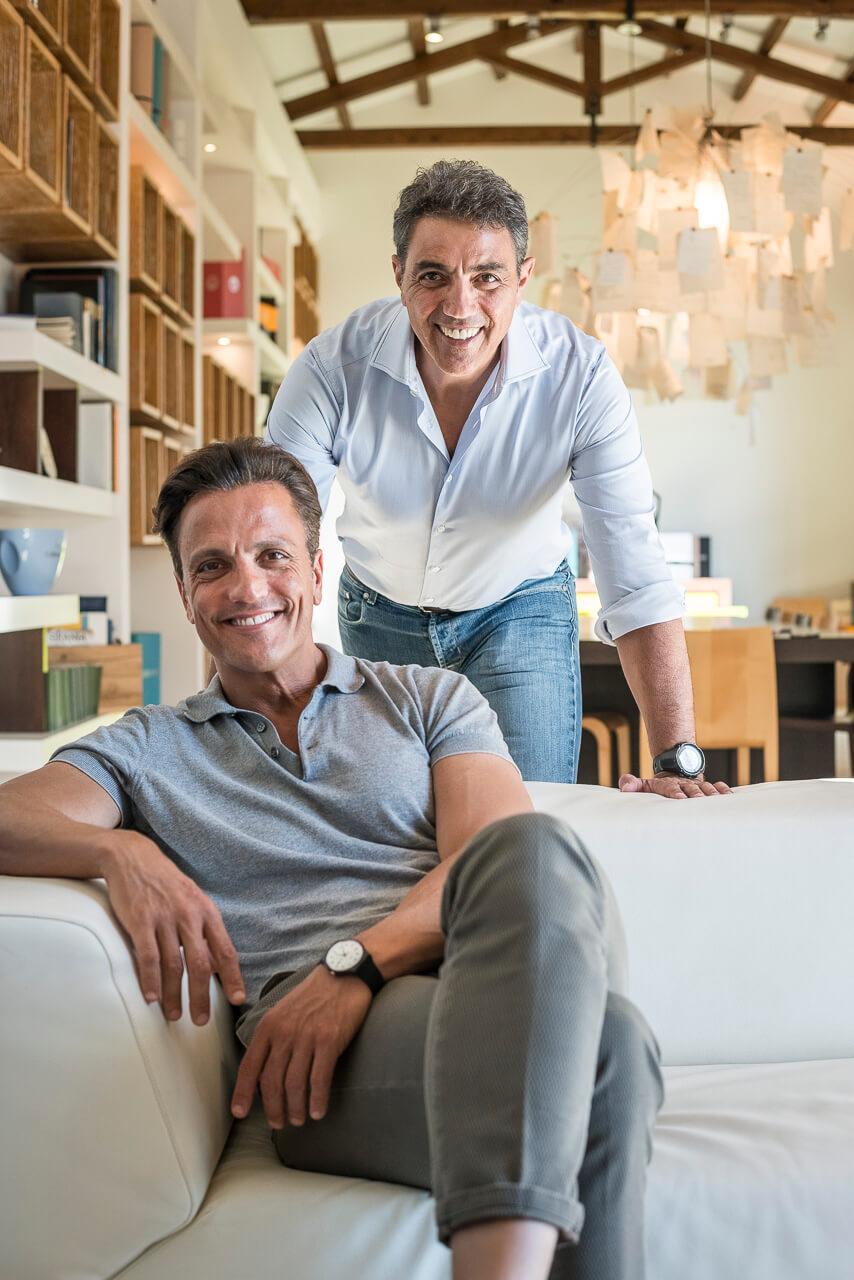 The white soils of San Giacomo reflect sunlight in a way reminiscent of snow, literally blinding the viewer. The 140 hectares of vineyard planted here are located near Butera in the southeastern part of Sicily where temperatures approaching 40° centigrade are no exception during the afternoon. Fortunately, a refreshing breeze cools the grapes at night. As typical for the island as Nerello Mascalese in Etna, Nero d’Avola, named after the nearby town of Avola, predominate here, but Merlot and Syrah also thrive.

This impressive site is located in Butera. With its characteristic white soils composed of lime, clay and sand, called “Trubi” in the local dialect, they are responsible for this fascinating wine’s underlying minerality. Each year at most 25,000 bottles of Sàgana, a pure Nero d’Avola, are produced from the oldest vines and regularly garner the wine world’s highest ratings. Success, though, is seldom an accident. Both during green thinning and the final “selezione brutale” at harvest as much as half of the grapes are culled, leaving only the best for this stunning wine.

Partinico is where all threads are woven together

Not far from the administrative headquarters in Partinico stands the family’s state of the arts’ winery, equipped with all of the most modern tools of the trade. Head of production here is Alberto Cusumano, Diego’s brother, who is ably supported by the oenologist Mario Ronco from Piedmont. During harvest all grapes are picked by hand and, with the exception of those from Alta Mora, brought here. With 500 hectares of vineyard, and a total annual production of two and half million bottles, accurate logistical planning is essential.

Anyone who has spent time in Partinico will recall the memorable quip of the young Tancredi in Giuseppe Tomasi di Lampedusa’s famous novel Il Gattopardo, in English The Leopard: “If we want everything to stay as it is, then everything must change.” 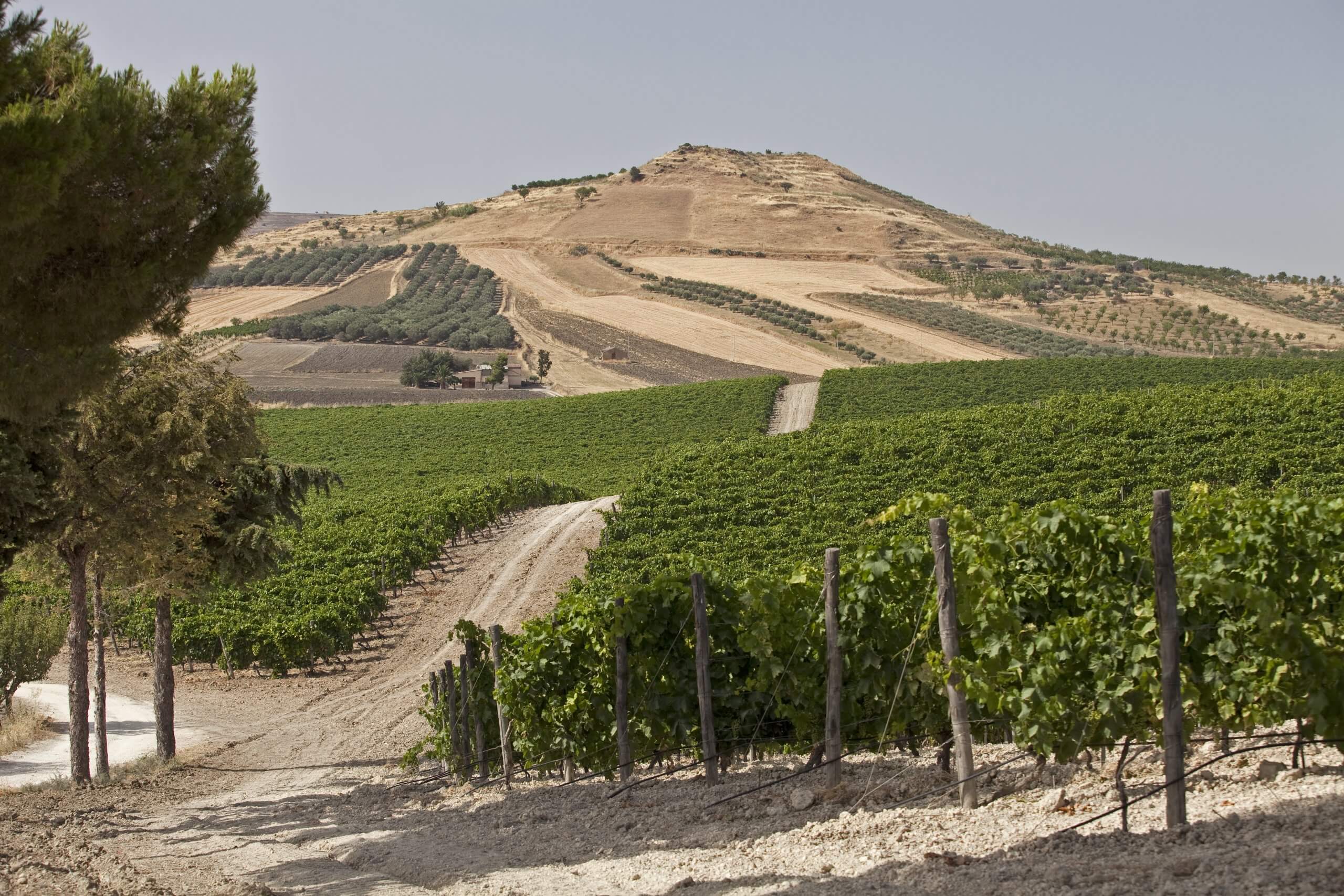